Interview for Frenchy for www.ainaskin.com in cooperation with NS Revolt
Intro: Hello Frenchy. To those who don't know you, can you give us an introduction please?

Hello I’m Frenchie and I played bass guitar for Skrewdriver from 1984 to 1986. Before that I was in a band called “The Elite” and before that “The Firm” from South London. 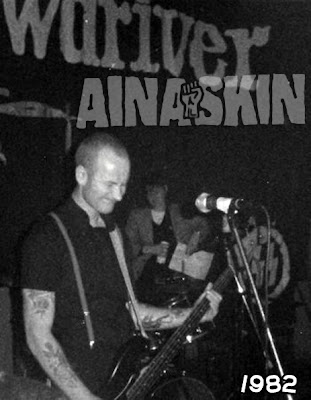 1. How did you join Skrewdriver. Any idea how many gigs you played in the band and did you co-write any of the songs?

The Elite had split up and Mickey French (who went onto manage Skrewdriver) asked if I was interested in meeting Ian to talk about reforming the band in London. I was well pleased cos I was a fan anyway so we met up hit it off straight away and it went on from there. I can’t remember exactly how many gigs I did but I played at the first “100 Club” gig and all the way till the 2 nd or 3rd RAC gigs in London. Ian wrote the words and structures of the songs then we would add our own bits for example the beginning of “Smash the IRA” and Lester (aka) Mark Neeson would write the guitar breaks. Then we’d sort of decide who would start which song and how it was a bit of a Chinese parliament.

2. Stigger (the last Skrewdriver guitarist) once said that the gigs are practice sessions. That they never had a proper band rehearsals during the last years. In your days, how were Skrewdriver rehearsals generally like?
It started with just me and Ian playing guitar a couple of times then I got Geoff (the old Elite drummer) to join so we could practice properly we did 2/3 rehearsals like that and recorded “Anti Social” and “Boots and Braces” for the “United Skins” album. We put an advert in sounds magazine for a guitarist and Lester who I Knew from South London got the job. We then recorded “Back with a Bang” and did 3 days rehearsing before the first “100 Club” gig. After that we rehearsed once or twice a week. We would go through the set list twice (more if we fucked up) and Ian would write new stuff each week.

I think we did 3 hour sessions at first then cut it down by an hour and would just go through the set twice. Ian me and Lester was mates anyway and all went out drinking together so rehearsals was another night with beers and giggles but with work thrown in. 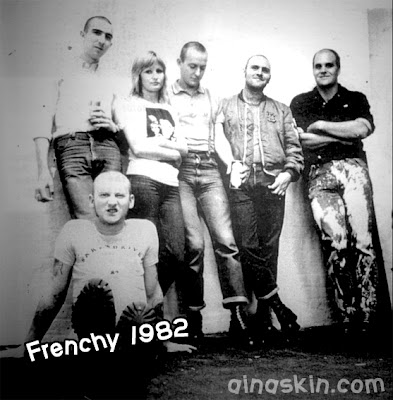 3. How was Ian like? Care to tell us a story about a day in your life during Skrewdriver times.
He was a really nice intelligent bloke wiv a great sense of humour although his dress sense was a bit iffy when he first moved to London. We got on really well and were out drinking normally three nights a week plus the rehearsals. I always remember he hated the taste of beer but liked to get drunk so he would force down a bottle of Merrydown cider before we went out and then would be ok for the night. He used to have to hold his nose while he drunk it – nasty stuff but it did the job. We’d start of in his bedsit in East London then get a tube up to West End or Skunx in Islington there always seemed to be gigs or parties to go too back then. Sundays was always down “The Last Resort” and a few beers at lunchtime then back to work on Monday.

4.Why did you quit in Skrewdriver?

I had always wanted to join the Army and songs like “Smash the IRA” sort of gave me the push to go and do it. About that time the band split anyway the drummer had enough of the hassle we was getting, the guitarist fell in love and we couldn’t get gigs and it all seemed to be grinding to a halt. I always new Ian would carry on because he was “Skrewdriver” and there was always budding musicians waiting to fill the gaps. We’d done our bit and it seemed time to make way for the next generation. 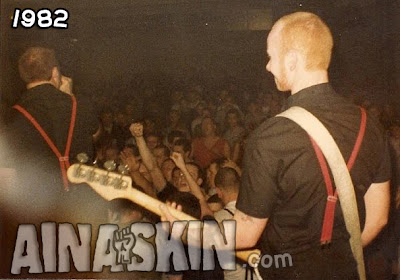 5. One of your claims to fame is definetely playing the bass for such anthems as Back With A Bang, I don't like you, White Power, Smash the Ira, Voice of Britain etc... What have you been doing since then?
I served for 12 years in the Para’s during which time I formed a band called “Fat Albert” and we played the bars in Aldershot and the Naffi’s in West Belfast. I left the Army when I was 35 and tried to settle down but couldn’t so went travelling, I then worked for four years doing private security in Iraq. I’m currently back in UK doing scaffolding and roofing at the age of 50 have been writing and recording for my new band Flathead (aka) FH:33 and working with “Voice of Britain”.

6. You work on music again, Have any of your songs been published?
We have a website which is being updated as we speak. There’s some stuff on You Tube we’ve produced a 6 track sample EP and are working on an album to be out later this year. So far we’ve played one support slot at the Bridgehouse2 and people seemed to like it (the music).

7. Who are your musical influences?
First band I ever liked was Slade then early punk stuff like the Pistols, Clash, Dammed. I was a Skrewdriver fan and had all the early stuff on Chiswick and Stiff records so it was a buzz to actually end up in the band. One of my earliest influences and the reason I wanted to play bass was Motorhead. I met Lemmy a few times cos he knew Ian from way back when he is another really nice bloke.

8. Do you have any personal contacts with other former Skrewdriver members?
I still speak to Mark Sutherland and recorded the first 6 FH:33 tracks at the same studio we used back in Skrewdriver days. The other two members of the line up from when I was in Skrewdriver I’ve never heard from since they left, but I wish them well wherever they are. I met Merve and Stigger at a few gigs when I was on leave from the Army but I’ve moved around that much that I’ve lost contact with hundreds of people over the years. 9. From 1984 to 1987 a yearly Open Air festivals in Suffolk were held. What are your striking memories from those gigs? The venue of the gig was owned by relatives of BNP’s leader Nick Griffin if I’m correct.
I had already left the band then and didn’t attend any of the gigs so don’t know too much about that apart from I wish I’d played them.

10. Do you recall how and when you were informed about the death of Ian Stuart? What was your reaction? Do you believe it was a car accident?
This is a strange one, I hadn’t seen or spoken to Ian for a while cos I was posted to West Belfast for 3 years. I came home on leave wiv an Army mate from Nottingham and we ended up meeting up with Ian by accident. We had a great night and was driving around in the mini (me, Ian and the driver – can’t remember his name) anyway they dropped me off the next day I went back to Ireland. About a week later I got a call from Mark Sutherland and at the same time was watching MTV when they announced the death of Ian. I wouldn’t like to guess about the crash itself but I lost a good mate and I am glad I saw him that last time.

11. I know it’s not easy to answer, but what is your favourite Skrewdriver album/song?
I always loved “Anti Social”, “I don’t Like You” and “Government Action” but I always think the ultimate one for me is “White Power” cos it just said it all.

12. There are some books dedicated to ISD, which one of them is your favourite? I think “Nazi Rock star” is most informative and well written…will you agree with my opinion?
I’ve only ever read “The way it’s got to be” by Joe Pearce I’m afraid, but will now catch up with your recommendations.

13. Ian was famous with his great sense of humor. Do you still remember any of his jokes or anecdotes?
Before going out for the night Ian would always say “tonight gentlemen we shall go out as mighty ale warriors and return as slobbering beer oaffs” and we always did and it still makes me smile today. 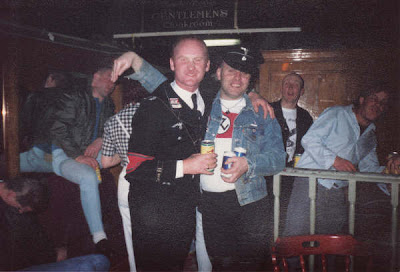 14. To what extend did Ian Stuart influence your own attitude and life? After all this years what do you nowadays think of Ian’s lifework and legacy?
He was a man who lived what he believed he was a great talent and it was a shame more people did not get to hear his music before he died, but his death has made him immortal in some way so in the end he beat the system that tried to destroy him and most of all he was a really funny nice clever loyal bloke that I was lucky to have as a mate.

15. Any idea if Ian followed any football team? As far as I know he used to support Manchester United FC in his school years (Manchester is quite near to Blackpool), he also mentioned George Best as his favourite player in an interview for “Last chance” magazine.
He never showed much interest wiv in football to me, I think he liked Man U as a kid but most kids do, we tried to keep football out of the music as much as possible at the time for obvious reasons.

A skinhead mate called Den RB that I’d known for years formed the band while I was in detention center and got a support slot playing with “The Last Resort”. When I got out I went to a rehearsal 2 days before a gig and liked them a lot. The next day the bassist broke his hand in a fight and I got a call to fill the gap. It was a bit hit and miss, but went down well I then stayed wiv The Elite and co-wrote the songs music etc. We got our own following and Combat 84 started supporting us, we had a few mentions in Sounds did a 4 track tape but it all ended in 40 minutes of fame on channel 4 at Benny’s Bar in Harlow which wasn’t a bad thing cos I then moved to Skrewdriver which was a bit of a dream at the time.

17. How can fans-to-be gain access to your music? Do you have anything on youtube with sample songs?
Available now we have a 6 track EP and all 13 tracks will be available to listen to on the new website. We intend to release an album called “FH:33 Guilty” this year there are 2 tracks on you tube (Satan’s Mile and 20 Seconds) from the Bridgehouse2 its early days but so far the feedback is positive. 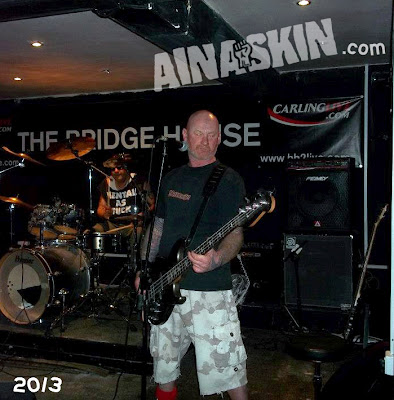 18. Vinyl records, cassettes, CDs or downloads? (regardless of current popularity)?
More stuff will be available soon as we are in the process of recording and producing and have gigs lined up for this year.

19. Do you follow todays RAC scene? Name one of your favourite albums please.
I’ve not been in contact with the scene for quite some time and need to catch up on the newer stuff out there.

20. If you had to choose a quote (or a line) to describe what motivates you day to day, what would it be?
I think Ian summed it up wiv “live life to the full, it will soon be time to die”

21. Any last words? Cheers for the interview!
Thanks for keeping the faith it ain’t over yet….cheers stay lucky….Frenchie
Posted by Revenge at 15:24 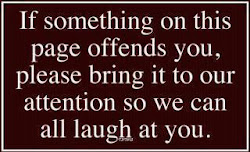